Tír na nÓg (The Land of Youth) is a land inhabited by the Tuath De, the gods of pre-Christian Ireland.

Long, long ago in Ireland, from the second century after Christ until the third century, there was a band of warriors called the Fianna, who defended Ireland against invasion. This is part of the legend in Irish mythology that has been passed down by word of mouth for hundreds of years and eventually recorded by poets and bards in writing which has given permanence to the story for ever more.

The leader of the Fianna was Fionn mac Cumhail, and his son was Oisín the poet.

Of all the stories of battles they fought in this world, and the adventures they had in the Other world, and all the turnings and twistings of the heart they endured in both worlds, one story will never be forgotten, and that is the story of the day Oisin met Niamh and their story began.

The Legend of Oisín and Niamh

The Legend of Oisín and Niamh is a famous old irish story.

It was also used as an idea for the Irish movie "Into the West" written by Jim Sheridan back in 1992.

One day, Fionn and Oisinn and their band of Fianna warriors were hunting around the Ring of Kerry, and they stopped to rest on a hill overlooking the Atlantic Ocean, the way they could see if any invaders were coming. And they saw one. Now, it wasn't often an invader came to Ireland without a fleet of boats and a whole army behind him, but this one didn't have even one boat.

This invader was riding a majestic white horse across the tops of the waves, and as Fionn and Oisín and the rest of the Fianna stared in amazement, they could see that the invader was a beautiful young woman with long gold hair that flowed down past her waist and streamed out behind her in the wind. 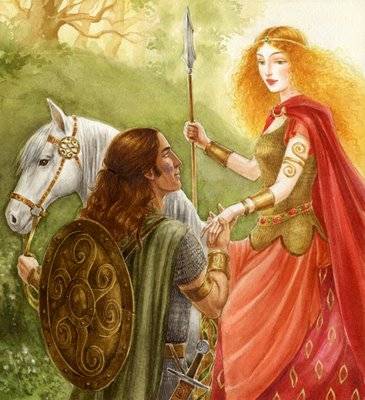 Niamh of the Golden Hair

Spéirbhean ghléigheal álainn, a dream-vision woman whose beauty radiated from her like shafts of light.

The older heroes of the Fianna pulled in their belts, to redistribute some of the bulk back to where it had slipped down from their chests, and the younger heroes wished they had remembered to brush their teeth that morning. (Irish men never change eh?) Fionn looked at Oisín standing beside him, and he could see that this invader had already made a conquest, before she even reached the shore.

She was the most beautiful woman Young Oisín had ever met. At the first sight of her, Oisín's heart did a double-backflip and tied itself into a knot. He was gob-smacked, but this great hero -- who had battled many a mighty warrior of this world and fearsome creature from the Other world -- was too weak to even smack his gob.

As the woman rode her horse up the hill to where Fionn and Oisín were standing, Oisín's knees started to tremble.

She stopped in front of Fionn and Oisín, and Fionn said by way of opening the conversation,"You are very welcome to our country, young lady. I don't believe I've seen you here before."

"But I've seen you," she said, "when you couldn't see me, Fionn mac Cumhail. I've often come to Ireland to watch you and the Fianna ... and your son Oisín."

At the sound of his name on her lips, Oisín's knees turned to jelly.

"What is your name and where do you come from and who is your father and what is your husband's name?" said Fionn.

"My name is Niamh Chinn Óir from Tír na nÓg, and my father is Manannán mac Lir, who is lord in that land."

Her name -- Niamh -- means "brightness." Niamh of the Golden Hair, from the Land of Youth, where no one ever grows old.

"You didn't mention the name of your husband back in Tír na nÓg," Fionn reminded her, and Oisín and every man of the Fianna held his breath.

"Many men in Tír na Óg have offered me their love," said Niamh, "but I have given my love to none of them."

Oisín and the Fianna let out their breath in a sigh of relief.

Fionn looked at her with an eye well practised in judging the makings of a good wife.

"That seems very unfair of you, not to give your love to any man," he said severely, for he was a man with a keen sense of justice.

"Not to any man of Tír na nÓg," said Niamh,"because I'm in love with a man of Ireland, and I've come here to ask him to marry me and come back to Tír na nÓg with me." 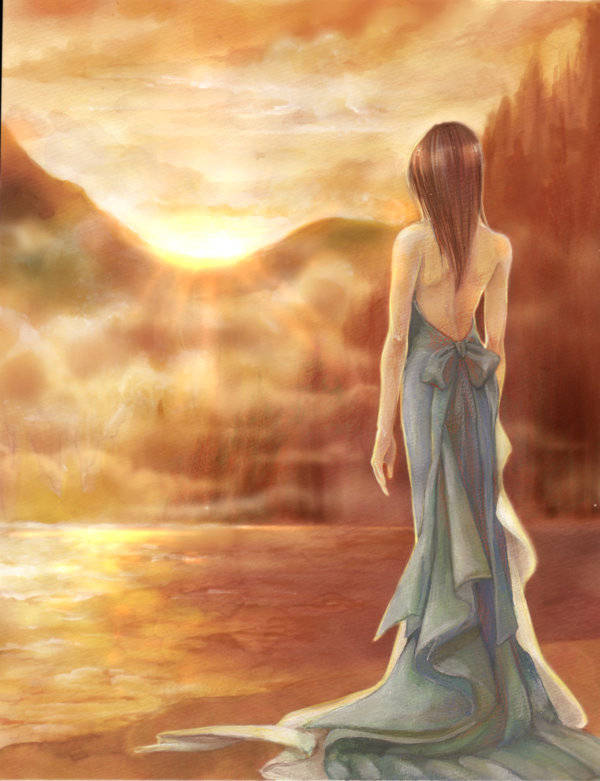 And then she smiled at Oisín, and the jelly in Oisín's knees turned to water. Oisín looked at his fellow heroes of the Fianna, and he saw several things at once in their eyes: jealousy that Niamh had not chosen them, and relief that she was taking some of the competition for the other women out of the way, but mostly he saw sadness at the parting of friends and comrades. And Oisín looked at Fionn and saw the look of satisfaction that a father feels when he sees his son well connected in marriage, but mostly sadness at seeing that son leaving him.

Oisín leapt onto the great white horse behind Niamh, and they galloped off across the waves to Tír na nÓg, where Oisín received a warm welcome from Manannán and his people. And if Oisín had fallen completely in love with Niamh at first sight,he fell twice as completely in love every time he looked at her.

Now, if this were a fairy tale, I could say, "And they lived happily ever after." But it's not a fairy tale, and they didn't. They lived happily for three revolutions of the seasons -- or three years,as they would have said if they counted time in that land where time doesn't exist -- until one day, Oisín said to Niamh, "I keep remembering the look of sadness in my father's eyes and in the eyes of my friends in the Fianna as I was leaving Ireland. If they miss me as much as I miss them, they'll be as happy to see me again as I will be to see them. I'd like to borrow the white horse and go back to Ireland for a short visit."

"Don't leave this place," said Niamh.
"Don't go away from me, my darling.
"If you leave Tír na nÓg,
"You will never return."

"Of course I will," Oisín said. "I love you and I could never be happy without you. I'll come back so fast you'll never know I left."

And Oisín said to Niamh what many men have said to many women down through the ages, and as far as I know, some men are saying it still: "Silly woman, don't worry. Nothing is going to happen."

When Niamh saw that he was determined to go, she said,"Remember when I went to Ireland to bring you here, I stayed on the horse the whole time.

Whatever you do, promise me you won't get off the horse. Don't even touch the ground."

And away over the waves he galloped on the back of the great white horse, and in no time at all he arrived in Ireland.

He went directly to Dún Áileann, where Fionn and the Fianna lived when they weren't out hunting or defending Ireland against invaders.

This is a massive fort on the hill of Knockaulin in County Kildare, which was built by Fionn's great-grandfather,Nuada Airgetlámh -- Nuada of the Silver Arm, king of the Tuatha Dé Danaan. But as Oisín galloped up the hill, he noticed that the road was overgrown and the fields were untended, and he heard no voices and saw no people. And when he reached Dún Áileann, he saw that the roof had fallen in and the walls were tumbling down. He couldn't imagine what had happened. The headquarters of the Fianna was deserted.

Oisín went back down the road and turned the horse's head toward Glenasmole -- the Glen of the Thrushes -- one of the Fianna's favourite hunting grounds near Dublin. It was in Glenasmole that he saw the first people. A group of men were struggling to move a large rock, and Oisín wondered at this. Any one of the Fianna could have picked the rock up with one hand, and Oscar, Oisín's son and the strong man of the Fianna, could have thrown it over the south side of Glenasmole and landed it on Seefin -- the Seat of Fionn -- or over the north side of the glen, where it would land on what is now a haunted house called the Hell Fire Club. And here were ten men pushing and pulling and prying at the rock, and not able to move it an inch. What had happened to the people since Oisín left Ireland for Tír na nÓg?

Oisín didn't recognise any of the men as he rode up to them. He noticed that they were small and puny, about the size of you and me and everyone else these days. There was amazement in the men's eyes as they looked up at Oisín on the great white horse. He greeted them and asked them where he might find Fionn mac Cumhail and the Fianna.

"Fionn mac Cumhail?" they said. "The Fianna? There's no one around here named Fionn mac Cumhail and never was. Back in the old days, people used to tell fairy tales to frighten children about a race of evil giants called the Fianna who went around eating people. But no one tells those stories anymore."

That's when Oisín realised -- 300 years had passed in Ireland, while he thought he had been away for three years, and his father and friends had been dead for a long time.

And he turned the horse's head toward the West and Tír na nÓg, but one of the men said, "Prove what you say is true by lifting this rock for us, and then we'll listen to your stories of Fionn and the Fianna."

"I'll do that, so," Oisín said, "to set the record straight,and then I'll go back to Tír na nÓg, for there's nothing left for me in this country."

Oisín remembered what Niamh had said about not getting off the horse, so he leaned down from the saddle and put his hand under the rock. But when he began to lift it, the girth of the saddle broke under the strain, and Oisín fell to the ground. And as soon as he touched the soil of Ireland, 300 years of this world's time caught up with his body, and he was instantly turned into a withered, blind, old man.

Niamh's great white horse galloped away. Some say it was because he was frightened at what happened to Oisín, but, no - he was wise enough to understand that Oisín could never return to Tír na nÓg. 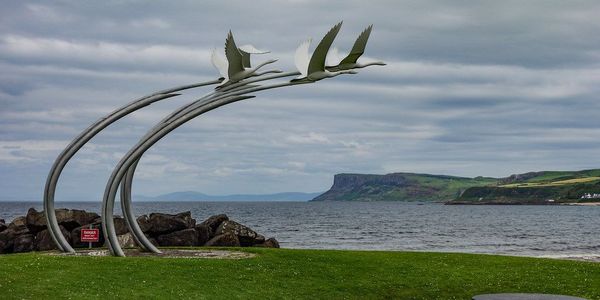 A sad, beautiful legend from Irish mythology, it is thought amongst scholars that the Tragic Story of the Children of Lir was first written in the 14th Century in north-west Connaught in Ireland. It is a rich tale that weaves elements from Ireland's ancient Celtic Pagan past, such as druidic

The Claddagh ring (Irish: fáinne Chladaigh) is a traditional Irish ring given, which represents love, loyalty, and friendship. The hands represent friendship, the heart represents love, and the crown represents loyalty. The design and customs associated with it originated in the Irish fishing village of Claddagh, located just outside the 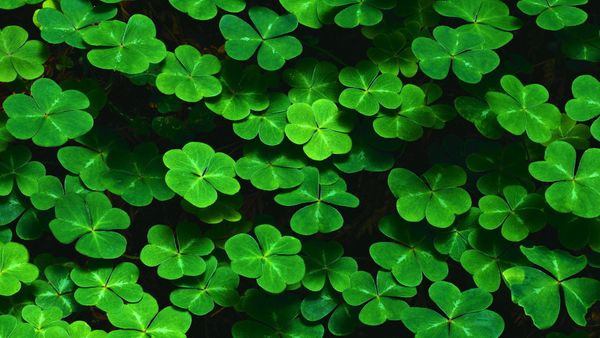 Ah the little shamrock... known the world over as the badge of Ireland. However the official emblem of Ireland is not actually the shamrock, that accolade belongs to the 12 stringed Irish Harp! A shamrock is a young sprig of clover, used as a symbol of Ireland. Saint Patrick, Ireland's